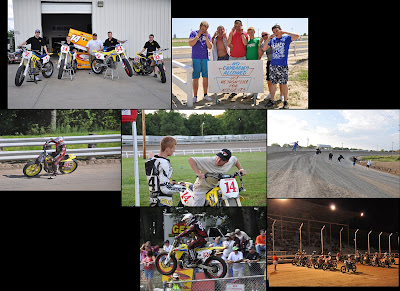 The Short track UK Team left Heathrow, London on 10th August to compete in some of the oldest and most famous flattrack meetings in the USA. Boastie lead the team of some of the best young riders in the country – Tom Woolley, Ben Baker and Tim Neave, along with the crew of Tom’s grandad Melv, Ben’s dad Kenny boy and Tim’s Uncle Tim Coles who took all the pics.

We landed at St Louis and drove to Jefferson City, Missoure where we hooked up with Travis Smith (former spanner man for Jake Johnson, Chris Carr and Kopp), who runs DBM Motorsport and was supplying our bikes. Travis was flat out working on sprint cars when we rolled up at 11pm, some bikes were in bits, with engines out, heads off etc., and knowing we were testing the next day it seemed a lot of work but Travis worked through the night to get the engines together. The next day we all set to to put all the bikes together, then loaded up. Travis then informed us his local test track was 2 hours away, so by the time we got to the 5/8 ths banked stockcar track it was 10 pm. The owner met us at the gate, switched on the floodlights and said ‘There you go boys, have skid, take long as you want’ and they didn’t even charge us a dollar!!

Our first meeting was at Colby, Kansas which was an 8 hour drive and we rolled up just in time for sign on. As we got into the pits Chris Carr was there to greet us shouting’hey you limeys can park near me’. Over the next two weeks Chris was awesome, he spent so much time coming over helping us with advice on riding and bike set up, plus showing us how to chew tobacco, cooking fresh fish for us all, and besides that he had all the races except one at Kansas. We all entered the pro 450 Class. The track was banked like Daytona, even the straights had steep banking. We all made it to the final, me and Ben were a bit off the pace in the final, Tom was on the back of a freight train but Tim was the star rider and finished 7th in the final.

Next day it was a 2 hour trip to Norton Kansas, a 1/2 mile dark clay track that was an old stock car track, lined with armco all the way round with the odd straw bale. We were all going much quicker than we were used to but it still blue groved up. Again, we all made the final, Tom had a fantastic ride and got 5th, I was 10th, Ben 11th and Tim had header pipe crack and had to retire. There was some sad news that one of the vintage competitors crashed and died at track, which we didn’t find out till after the meeting.

Next day we went to Weeknee race way and watched some Sprintcar racing, then on to Stockton Kansas,where they’ve been racing Flattrack at the Fair grounds since the 30′s and the tradition was for all the riders to ride through the town on their bikes which was pretty cool. Chris Carr lead the parade behind a police car, while the rest of us popped wheelies behind.

We entered 2 pro class, open and 450. The Stockton track had a hard concrete wall at the start and finish but for the rest of the track there was nothing – just a bank to fly over if you got it wrong! It was a fast track with long straights and we all struggled a little bit with the pace over the two days. We made all the Finals filling the last 4 spots in final, but it still was great fun and we learnt a lot.

Next we had 2 days off from racing but we had an 8 hour drive back to Jefferson, a day working on the bikes, then a 6 hour drive to Peoria,IL Shorttrack, so not much rest was had. This time there was a lot stronger field and the Experts had their own Class and we rode in the pro 450. The track was banked like Colby but smaller and a bit rougher surface but you could ride anywhere high or low. We found it tough going only Tim made the Final where he finished 17th.

The next we were at Galesburg,IL, a little track standing on top of a mound, in the middle of a field, with gripiest dirt I’ve ever ridden, it was more like we ride back home. In practice Ben got it all wrong going into turn one and dissappeared over the edge, he must have flown 30ft through the air but managed to stay on! We were all a lot quicker here, we got to the Semi’s and we were all in Semi 2. I got the holeshot, only to be passed by a girl (well a fast girl) Shyna Texter. By the end of the race Tim passed me for 3rd, I was 4th, Tom 5th, Ben 7th but only the winner got to the Final.

Next morning we were up at 6am to get to the famous Peoria TT track. Tom was the only rider representing UK and only had 4 laps to try to get used to track before qualifing, then he had 2x 4 laps to get into the top 32 out 42 riders – a pretty tall order as all the other riders had raced here two months ago. Tom missed the cut at 39th fastest but we were still proud of him, he was just 0.8 second off making the show. 30,000 fans watched the meeting (wish we could get same at kings lynn). Henry Wiles won again, I think thats his fourth time now but he’s still got few more wins to get yet to beat Chris’s 9 wins. It was Chris ‘s last time at Peoria and they gave him a great send off.

We said our goodbyes to new and old friends we’ve met and headed back to St Louis to catch our plane back to Blitey, having had a great time.

Where do we start with thank yous?

Travis Smith (for sorting bikes and transport),Chris Carr and family for spending so much time with us ,Frank Harding and his Team at the Kansas races, All our sponsors including Jacopo Monti, Marshall Kinrade and every one who sponsored our push bike ride at Amman, we all appreciate your help with our trip of a lifetime.