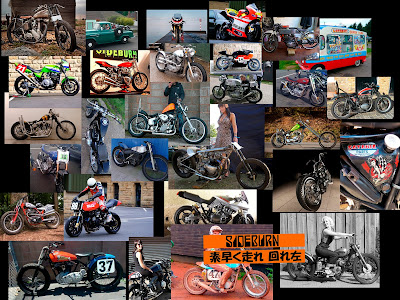 Once upon a time you’d wander into a machinist’s shop and after being given a muddy mug of tea (if you were lucky), and having averted your eyes from the customary naked siren calendar, you’d start to gaze at their grubby pin-board with its mad array of photos. Bikes they had either worked on, owned, or merely dreamed of; torn from magazines. Any gem of actual information was savored. If you were really obsessive you might ask for a phone number to track down a current owner or maybe even try to find a back-issue of said magazine (if you could work out which magazine, which year, and which month it came from).
Then came the internet, and things became almost boringly easy. The spread of cross-breeding influence has spread like a sexual disease. However even with the wonders of technology, one will always spend helpless hours trawling the murky depths looking for info, and the hopeless quest for HiRes photos of a particularly special bike, whose only proof of existence is a thumbnail you found on a forum, you think, but you cant remember where…..
Imagine you could actually pour over this bike in reality.
You can. Sideburn has amassed a pant-wetting selection especially for Rollerburn. Hibrow to lowbrow; blinging to backstreet lash-up, Ridden or until now hidden, but each very very worthy. BP