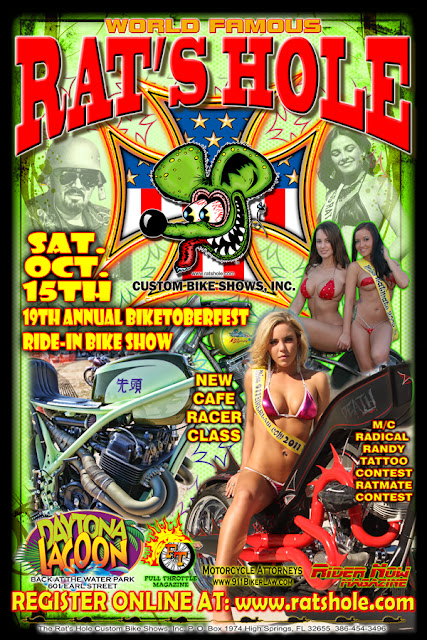 Café Racers have become almost as popular today as they were in the 70′s and they will be included as a new class at the 19th Annual Biketoberfest Rat’s Hole Custom Bike Show, Saturday, October 15th at Daytona Lagoon, 601 Earl Street in Daytona Beach.

The show will include 21 classes with 100 trophies to be given away, and a special invitation is going out to all Cafe Racers.

“The top three Café Racers will be invited to participate in a Café Racer Showdown judged by the public at the 40th Rat’s Hole Show during Daytona Bike Week in March 2012,” said show owner, Ted Smith.

As usual, there will be plenty of magazines, tv and radio shows present. Registration for the ride-in bike show is 8 to 9am. Line up on Ora Street and proceed to the pre-registration table to get your show card. No bikes will be accepted after 10am, when judging begins. Trophies will be presented at 5pm. All bikes must fire at the gate.