What’s in a name?  A lot, if it happens to be attached to the fastest road-going motorcycle from the late 1920s and well into the 30s.  Charles Hobbs, owner of a garage in Guildford, was not satisfied with the ‘fastest in the world’ performance of his standard 1929 Brough Superior SS100 with JAP JTOR 980cc engine; every SS100 was guaranteed to have recorded 100mph at Brooklands, but testers conceded they were happy to use the assistance of gravity (coming off the high banking) to hit the ‘ton’…   Hobbs embarked on a performance upgrade, while keeping the bike completely road legal.  Two years of development, working with George Brough and JAP themselves (who specially cast cylinder barrels for larger pistons), made the Brough a bit of a monster by 1931, at 1140cc.

The larger capacity, hotter cams, and better breathing gave a 13hp increase over the standard SS100 (which had ~44hp), and Motor Cycling’s Dennis May was invited to test the machine. It proved difficult to find a public road on which to stretch the beast to its limit…1931 was a long time before the existence of motorways, and 100+mph on tiny English ‘B’ roads meant villages, pedestrians, animals, and bends in the road were frequent, even if traffic police weren’t.  Simply put, there was nothing on the road with two wheels doing anything like that speed, and only a few supercharged Bentleys were faster on four.  Plus, the roads were far from billiard-table smooth, and calculating the percentage of wheelspin from the indicated speed was a guessing game; the rear wheel would have been airborne a lot of the time, aviating over bumps, as any rider of a machine with crude (or no) rear springing has found at high speed.  It feels like you’re flying… because you are! 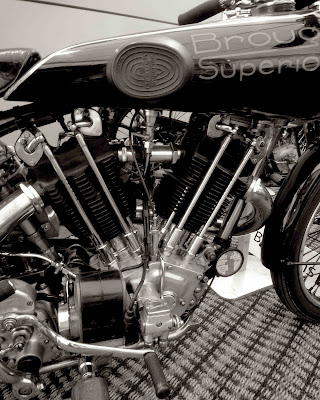 Moby had the highest spec rear suspension available in 1929; a fully triangulated swingarm from Bentley and Draper, with dual springs under the saddle, and hand-adjusted friction dampers keeping the plot under control.  Front forks were, of course, Brough’s own ‘Castle’ brand, very similar to Harley forks, but in reality both copied an FN design.  The long B-S chassis had super-solid headstock and robust frame, with enough rake to those Castles for a very stable ride at speed. 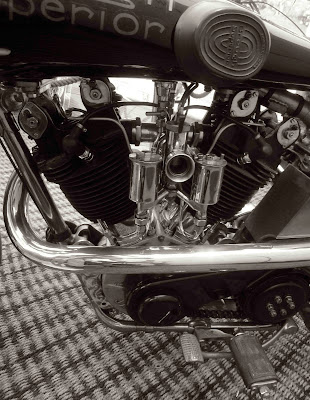 Dennis May’s first encounter with the Brough, in 1931, netted a “genuine 106mph”, the fastest road machine Motor Cyclist had ever recorded, and Hobbs dubbed her ‘Moby Dick’, so impressed was he with the bike’s staggering performance.  Not satisfied with this, owner Hobbs left Moby with Ted Baragwanath, a Brough racer at Brooklands and expert speed tuner.  In ‘Barry’s’ talented hands, the JAP engine gave 65hp (21 more than stock – half again the horsepower!), and Dennis May tested Moby in a more remote locale, on a fairly straight stretch of road…at least, until speeds topped triple digits, when several distinct bends were discovered.  The subsequent headline read, “Just Fancy, 106mph in Second!”  Hobbs barely shifted into top gear (third gear on the Sturmey-Archer ‘Super Heavyweight’ gearbox) before needing to shut the beast down, to avoid a rapidly approaching series of bends.  He calculated his rate of knots at 115mph, given the gearing, rpm, and wheelspin… a speed which wasn’t bettered by Motor Cyclist until the postwar Vincent v-twin appeared.

Hobbs later sold Moby Dick to the Bilbe brothers, who intended to race the machine at Brooklands.  At one handicap race in 1937, Moby was placed on ‘scratch’, meaning Brookland’s handicapper ‘Ebby’ Ebblewhite figured her as fastest of the race, and when other riders were flagged off, Moby sat on the start line until nearly lapped by the field!  Undaunted, Ralph Bilbe flattened himself over Moby’s tank, wound open the throttle, and finished the race a lap ahead of the next bike. 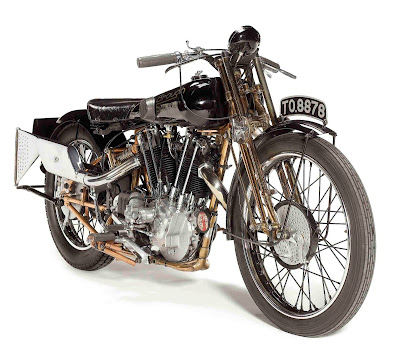