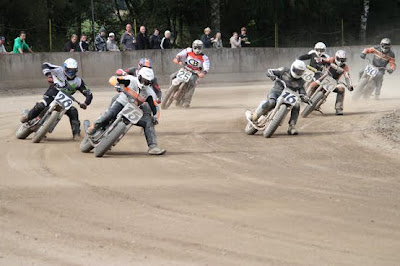 Round 6 of the international Mefo Sport Flattrack Cup 2011 took place on the challenging 500m oval in Hof-Westerwald, Germany. And for the second time this season we could welcome the junior category! Heidenreichstein winner Tobias Gatzenmeier was joined by short track UK junior Oliver Brindley. Twelve year old Oliver had no problem with the tricky conditions and demonstrated amazing skills which earned him loud cheering of the crowd!

Oliver’s dad, Derek Brindley had joined the experts in Hof where he was doing well until he lost control in turn three, taking Tom van Nes with him. Unfortunately Tom was not able to restart and we wish him a speedy recovery. Mick & Jan-Willem Jansen and Stefan Gatzenmeier were constantly battling and it promised and exciting final. JW Jansen made the hole shot and took the lead. On lap 3, an over enthusiastic Gatzenmeier took Brindley out in turn 3 causing a multi rider pile up involving Mick Jansen, Halbe Scheper and Wiemer Borger. Derek Brindley hurt his foot and was not able to join the inline restart. JW Jansen used his advantage of the inline start and took the victory, follewed by Gatzenmeier and Scheper.