Gunfire errupted between members of the Hells Angels and Vagos motorcycle clubs at the Nugget Casino in Sparks, Nevada late Friday night, Sept. 23rd during the closing weekend of the 2011 Reno Street Vibrations Festival. Officials said that Jeffrey “Jethro” Pettigrew, the 51 year old president of the Hells Angels chapter in San Jose, CA was called to the scene and died in the gun battle between the rival clubs. He was also employed as a heavy equipment operator by the city of San Jose for more than 20 years.
The Mercury News reports that two members of the Vagos club were injured in the casino shootout, but they are now in stable condition at a nearby hospital. “In the outlaw motorcycle gang culture, Jeff Pettigrew was a local icon in
San Jose, a very well-respected member within the ranks of the Hells Angels,”
said San Jose police Sgt. Larry Day. “This incident could definitely result in retaliation against the Vagos, and
a full-blown war that may result in deadly violence in San Jose and throughout
California.”
There was also the report of a drive-by shooting that sent a motorcyclist to the hospital with gunshot wounds to the stomach early Saturday morning, prompting law enforcement to shut down the event in an effort to prevent further violence.
Thousands of motorcyclists ride through Nevada in September to attend the annual Street Vibrations Festival in northern Nevada, in the Reno area that is followed a week later by Las Vegas Bikefest in southern Nevada. There are no plans to cancel the Las Vegas event.
“While we are disappointed to hear of the incident that occurred earlier this week in Sparks, Las Vegas BikeFest will not let it dampen the festivities that will be occurring several hundred miles away in Las Vegas beginning this Thursday,” said Rebecca Mitchell, an account executive for the rally. “Las Vegas BikeFest has never had an incident in its 10 years, and we work very closely with law enforcement and our own private security detail to provide a safe event for all attendees. We look forward to a great time and seeing everyone in a few days.”

The witness who recorded this video from the balcany of One Eyed Jack’s on Wed. August 10, 2011 said he was talking on his cell phone watching the Hells Angels Sturgis headquarters across the street when all hell broke loose! 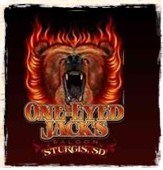 “I heard popping noises and looked down. Probably 20 Hells Angels and Mongols were going at it, fighting, etc. Within a minute, the Sturgis Police were at the scene, guns drawn and taking control. Notice the women in the clubhouse coming out with their hands over their heads. We had noticed the Mongols eating outside at the restaurant while walking in. Wonder if it was a turf deal since the restaurant is directly adjacent to the Hells Angels clubhouse?”

There were numerous arrests and six people were injured.