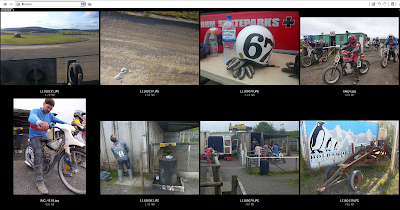 - the scrawniest track on the UK calendar. The parched conditions for the Saturday practice had me writing it off as the worst too, likening it to ricocheting around inside a dented biscuit tin, with prehistoric limestone crumbs acting as lubricating marbles. Choice polished rocks decorating the apexes didn’t inspire confidence either. Turning up late and then waiting for individual speedway riders to practice before a group of flat trackers could take their turn meant I didn’t get as many sessions in as I would have liked.
I bought some Buxton mineral water in a petrol station in Bristol on the way, and got a free re-fill in the pits from a dodgy looking ground pipe. 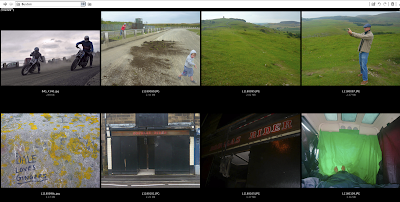 - is filled with fresh sod (inc grass) when ruts appear.
- set in the magnificent Peak District. Drogo suggested we go for a ramble after practice. Skooterfarm Dave thought we were soft southern townies and stayed in his van. We decided to head out for a castle on a hill in the distance, only to arrive at our destination 15 minutes later at a small folly; Solomon’s Temple built in 1890, the panorama was spectacular.
- has a closed down radio and television shop called Douglas Rider – what a great name for a band! Loved the old Clarendon font block letters (same as used for the STUK number boards), now a bit wonky. Had a lovely Indian at the Taj on the High Street. Slept in the car – this time minus the seats. Even hung up some some curtains.

Modified my on-board toilet to rectify the piss-fart issue of the Silverstone Mk1 model. Basically it’s a ‘Lightly Salted’ crisp packet in my boot.
No trapped gas, and a stable unit which avoids low-light kneeling spillage. And warms boot on otherwise chilly morning.
After just a couple of heat races, Drogo finally admitted defeat in the face of the bitch Vertemati. Dave kindly loaned his Wood Rotax, which involved some deft swopping in-between races, with both riders now running the same number but in different classes.
- attracts all-sorts. An original Craig Vetter Triumph Hurricane. A step-through gang whose C50, C70, and C90s all had the same tuned 150 pit bike engine up-grade, and a straight-through exhaust they picked up holidaying in Greece, that they noticed all the locals were screaming around with. 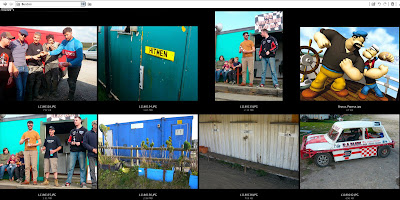 - is not somewhere to buy Bakewell tarts. I imported some of Mr Kiplings.
With overnight rain the track conditions made quantum improvement, racing in all classes was exciting and fast. Jamie intent on tanning me in the Novices, ended up cooking the barrier several times. Stuart ‘Popeye’ Lovell steamed ahead in his own league as usual leaving ‘Brutus and Bluto’ to bang their heads together. I held 2nd for most of the final (including all 7 novices), until relentless Jamie barged ahead and cleared off. But come trophy time, unbeknown to me, the points from the heat races were also included for the over-all ranking, so I did clinch 2nd after all.

- home to a lively stock-car circuit just above the speedway oval. Great entertainment.
On the way home I tried not to drive into a rock while gawking at the scenery like on the way back from Amman, and nearly drove into a large deer that sprang out into the road from behind a heather bush instead.
- Brilliant. BP