LYNYRD
SKYNYRD TO ROCK THE CHIP — Southern
Rock’s most influential band, Lynyrd Skynyrd rocked the “new” stage in 1999 at the Legendary Buffalo Chip and they are the first band announced for the Sturgis 2012 Rally. 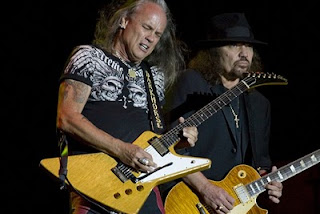 Sturgis biker music fans from around the world have for years been
riding America’s highways to the sounds of “They Call Me The Breeze,” “Sweet
Home Alabama,” “Free Bird,” and “Gimme Three Steps.” In helping to invent the Southern Rock genre, Lynyrd Skynyrd also helped invent a related genre – biker music.

From humble beginnings in the summer of 1964, three kids from Robert E. Lee High School in Jacksonville, Florida, Lynyrd Skynyrd has become one of the most respected bands in rock, helping to create and sustain the southern rock genre. The band will play at the Legendary Buffalo Chip during the official Sturgis Motorcycle Rally week, Aug. 6 through Aug. 12.

“Gimme Three Steps,” was their first hit in 1973, and Sturgis Rally bikers have been treated to a string of rock anthems that followed, including “Sweet Home Alabama,” “Gimme Back My Bullets,” “They Call Me The Breeze,” “I Know A Little,” “Saturday Night Special,” “What’s Your Name,” “You Got That Right,” “Swamp Music,” “Smokestack Lightning,” “Truck Drivin’ Man,” and “Free Bird.”