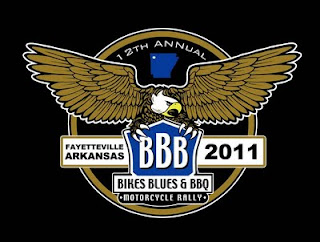 More than 400,000 rally fans made their way to Northwest Arkansas last year to enjoy the best in riding, music and barbeque at the Bikes Blues & BBQ Rally in Fayetteville, Arkansas. “This is our 12th year and we have added a fourth venue, more vendors and more entertainment,” said the event’s director, Joe Giles.  The 4-day rally kicks off Wednesday, Sept. 28th.
“Over the last ten years we have seen the rally grow from a small poker run to one of the largest motorcycle rallies in the country,” said Giles. In 2009, the rally extended from Fort Smith to Rogers and over to Eureka Springs. From the Randal Tyson Track Center in south Fayetteville to Dickson Street and up to the Northwest Arkansas Mall where Bikes, Blues & Hot Rods Too made it’s debut. Demo rides at the 2011 BBB Rally at Baum Stadium will include the new Harley-Davidson models, along with Can-Am’s new three wheeled cruiser and sport models, plus Yamaha and Suzuki. The Victory corporation, in conjunction with Freedom Powersports, will be bringing the 2012 Victory Vegas’s, Hammers, Jackpots, Visions, and Kingpins.

Bikes Blues and BBQ has more than doubled its fan base in 2 years on Facebook, which is also a common hook up for rally organizers and volunteers.

Rally with a Purpose
From the very beginning, the founders of Bikes, Blues & BBQ realized that although the three festival components of the rally — bikes, blues and barbeque — would be enough to put on a great event, so much more was possible. They wanted to hold Bikes, Blues & BBQ to a higher standard and give it a greater purpose. With that in mind they designated Bikes, Blues & BBQ as a non-profit 501(c)(3) organization dedicated to supporting local charities with funding raised during the rally. 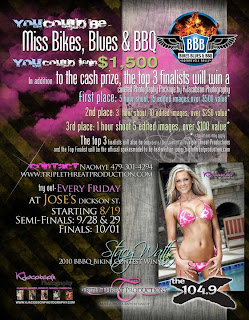 Bikes - Loaded with chrome and dripping with attitude!

Blues – A new partnership with the Arkansas Music Pavilion (AMP) in 2009 brought national and regional talent to the rally, including Blackfoot, Molly Hatchet, and The Marshall Tucker Band. Joe Giles was the official BBB Music Coordinator and emcee.

Candlebox and Jamey Johnson will be in concert Thursday & Friday night at AMP in 2011.

For the 2011 rally, Saturday will be “All Blues and Rhythm ‘n’ Blues Day”.
“We’ll have some folks who will really put a little jump in your rump all day and night long,” said Giles.

BBQ – Every year some of the best BBQ teams from around the country come here to compete in the KCBS Barbeque Cook-Off and the Arkansas State BBQ Championship. Starting Friday morning the air will be filled with the smoky aroma of barbequed chicken, ribs, pork, and beef brisket!


Details at: Bikes Blues and BBQ.